What Apple Watch Means to Brands 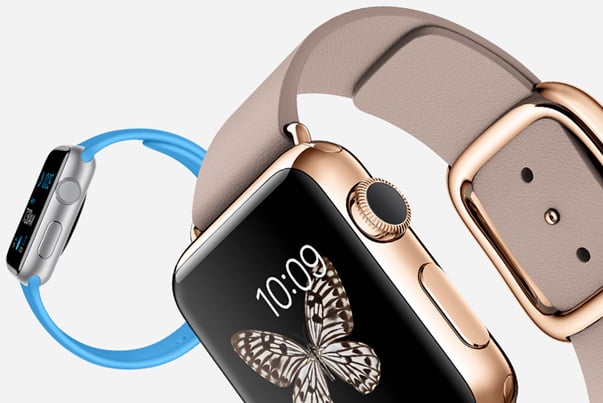 Apple Watch is coming, and it's going to have a big impact on brands.

The Apple Watch, available on April 24, 2015, has been praised, vilified, and dissected by a wide-ranging audience, including everyday consumers, technology geeks, Apple fans, and fashionistas. The new product has also injected some strong style mojo into the Apple brand. But should businesses care about the Watch? Absolutely. Apple Watch will have far-reaching impacts on several industries, from healthcare to automotive and retail. The Watch, which blurs the line between mobile and wearables, will pressure brands across the board to make mobile experiences more personal and less intrusive.

The Skinny on the New Watch

The Apple Watch is the latest product release in an emerging market for smart watches. When it hits the market this month, the Apple Watch will be available in multiple styles, sizes, and options for wristbands and priced from $349 to $12,000. The product will sport several features such as a digital crown that makes it possible for the user to scroll and zoom without needing to touch the screen. Importantly, the Apple Watch will use the new Apple Pay feature, through which users will be able to pay for goods and services with a flick of their wrist at participating stores (akin to a smart wristband you might have used at an entertainment venue like Disneyworld). Based on early reactions from analysts and media, the Apple Watch comes closest to being both a functional mobile device and a fashionable wearable (something that competitors such as Samsung have failed to do with their smart watches) -- which is why the device is creating buzz.

As Forrester Analyst James McQuivey told CNN, "The Apple Watch defines a category in ways that other competitors will now have to work furiously to catch up to. In classic Apple style, the company has introduced a new interface -- the digital crown along with a tap and touch capable surface -- that will make Apple's watch experience significantly easier to use than anybody else's."

The Watch will have far-reaching impacts on many industries. Here are three examples:

Thanks to the new Apple Pay payment feature, the Apple Watch makes the process of buying goods and services as simple as waving your wrist at a sensor. No more fumbling for your debit card, iPhone, or cash while you stand at a checkout line your grocery store.

Apple Pay is a mobile payment service that will make it possible for owners of Apple Watch and iPhone 6 to purchase goods and services at retail locations that use near-field communication (NFC) technology with the Passbook app and Touch ID. Apple says 220,000 locations will accept Apple Pay, including Target, Walgreens, Macy's, and Whole Foods.

You can use Apple Pay on the newly released iPhone 6. So why bother using it with a watch? Because of the convenience factor. There is a world of difference between fumbling for your iPhone to pay for your Starbucks with the MyStarbucks Reward app and elegantly flashing your watch at a scanner. Disney understands the convenience factor: the company has been making a major investment in wristbands (MagicBands) as the next generation of smart cards that you use throughout your stay at a Disney resort. Ease of use means more use, which is good for Apple and participating retailers.

Apple Watch, coupled with Apple Pay, will compel retailers to commit to NFC payment systems -- whether Apple's or a competing platform such as Google Wallet (Walmart will go forward with a competing system). According to Gartner, only about 10 percent of retailers have adopted NFC technology, but Apple Pay could just be the turning point. Apple has already lined up financial institutions necessary to make Apple Pay take hold. And, as The Wall Street Journal noted recently, "Apple has a successful track record of helping to thrust existing technologies or services into the mainstream." The conditions are in place for Apple to do the same with mobile payments in retailing.

Apple has already made forays into the automotive industry with Car Play, its interface that displays information such as maps, navigation, and messages on your car's screen. Apple Watch will likely make auto brands think harder about how the auto integrates with the mobile experience. In other words, think in terms of connected cars. BMW has already developed an Apple Watch app that displays the charge level of a BMW car, a map of where you have parked it, and directions to find your car. The Apple Watch could also replace car keys and other functions that enable you to monitor and interact with your car while you're away from it.

What about the driving experience, though? The Apple Watch's navigation and notification features could be a distraction. But already the Apple Watch has challenged in-car multimedia systems with its contextual reply feature, according to KickingTires. If someone texts you a question, the Apple Watch makes it easier for you to reply with pre-populated responses. "By contrast, many preprogrammed text responses in automotive multimedia systems adhere to a rigid set of answers; this blows them into the Stone Age."

Brands such as American Airlines, TripAdvisor, OpenTable, and Starwood Hotels and Resorts have developed apps for the new Apple Watch, which are sure to make your next vacation more hassle free. From checking in for your flight to using your Apple Watch as a hotel room door key, these apps will allow you to focus more on your plans, rather than lost room keys. For instance, the American Airlines app has essential functions such as notifying you when it is time to leave for the airport, sharing information about flight or gate changes, and providing flight check-in capability. The appeal to a traveler is similar to that of a distracted customer in a retail store: when you are schlepping luggage through an airport and perhaps navigating an unfamiliar terminal, being able to get critical information with a simple flick of a wrist makes travel more bearable.

Yes, the Watch is a new screen for brands to conquer -- but it's much more. By its nature, a watch is an extension of ourselves. We don't slip it into our pocket like we do a smartphone; rather, a watch is a more visible lifestyle utility, which is why we take more care when we buy one. Consequently, brands are going to be under even more pressure to create content that is less obtrusive and more visually appealing.

Consumers will be even less tolerant of unacceptable, distracting content when it's visible to them and everyone around them via their Apple Watches. For instance, brands accustomed to notifying consumers via buzzes and lights may soon need to put an end to "notification mentality." It's one thing for a brand to send you a notification on your iPhone while your device is tucked away in your purse or pocket -- it's quite another for your expensive watch to start talking to you while you are on a date. Moreover, brands will likely need to think of the appearance of apps in context of the design of the Apple Watch, especially the more expensive model. We may not care how Candy Crush looks on our iPhones, but we may feel differently about how an app appears on a wristwatch, which is a personal extension of our identities.

Brands have now entered the season of the Watch app. We can expect brands to create a bumper crop of next-generation apps for the Apple Watch thanks to the launch of WatchKit, created expressly for third-party developers. In their rush to develop new user interfaces on the Watch, though, savvy brands will keep their eyes on the customer, not the app.

Editor's note:  this post was originally published in September 2014 and has been updated for timeliness.