On a Mission to Help a New Kind of Company Thrive

After founding and running Web 2.0 conferences for a number of years, John Battelle was fed up. The co-founder of Wired had had it up to here with status quo conference rooms and generic hotel ballrooms. So, while mountain biking with friend Brian Monahan, the two came up with an idea that would turn the conference on its head.

Not long after, they founded NewCo. True to their vision, NewCo does not organize conferences. Instead, they facilitate festivals where curious minds, startup junkies, and entrepreneurs can hear from and interact with innovative new companies in the company's own offices. With multiple tracks or "stages" from which to choose in each time slot, participants curate their own experience to learn and make new connections. NewCo offers an up-close and personal experience of each company in its native habitat, including office tours and insights from company founders.

Past participants have included a range of companies. For example, the 2014 NewCo Festival in San Francisco included well-known innovators like IDEO, airbnb, Pinterest, and Yahoo. But less obvious and equally interesting companies, like Hampton Creek--a food company that operates like a technology company--are equally represented.

NewCo Festivals are hosted around the world and they're quickly gaining momentum. But Battelle isn't just interested in reinventing the conference. He's on a mission to use the NewCo festivals to help a new kind of company thrive. Battelle believes that these new kind of corporations, or NewCo's, with their new ways of doing business, will help create thriving, connected ecosystems in host cities.

So what makes a NewCo? How are they any different from old companies?

The next NewCo festival--NewCo LA--occurs on Wednesday, November 19th from 9:30 am to 6:00 pm. Over 50 host companies, spanning from Venice to downtown Los Angeles are opening their doors. For registration go here. 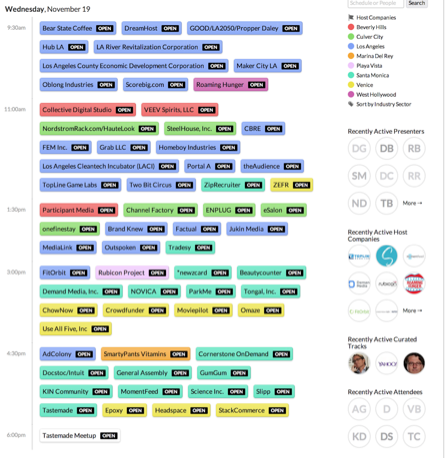