The Dawning of the Wearable Tech Era

The second annual Glazed conference is set to take place June 3-4 in San Francisco at the Regency Center. I spoke to Wearble World and Glazed Conference founders Redg Snodgrass and Kyle Ellicott about the burgeoning wearable economy, and their thoughts on what it will take for the wearable era to truly come into its own.

Redg Snodgrass: This year’s Glazed, in title and theme is all about the “Dawning of the wearable economy.” We’ve blended experts from various businesses like mobile and Facebook - people who have been early adopters driving early revenues on these emerging platforms - with people who are the incumbents in wearable tech. A lot like what we did last year, we’re blending people who have been successful in entering new and emerging markets in the past with people that are driving this new wearable market. Everyone from Motorola wearables to Pebble and Misfit will be at Glazed.

The outcomes of the conference are going to be focused around understanding what the business opportunity is for all of us, and understanding how to capitalize on it. The unique thing about our conference is that we are really clued in to not just the technology that is wearables but also what is going to bring about the business that really makes sense for the community to take it to the next level.

Kyle Ellicott: That’s right. And one of the things we’ve seen grow between the last Glazed and this one is that prior to this, there were still a lot of people trying to understand the space, and trying to understand how to create business around it. They had an idea or they had an app, but that’s it. But now, we’ve reached the place where people are starting to build businesses around it, small and large. We’re really starting to see the fruits of those labors. You have your large companies like Basis and Misfit, but you also have companies like Scully and Drumpants who are not just makers, but are taking their ideas and making them a reality. 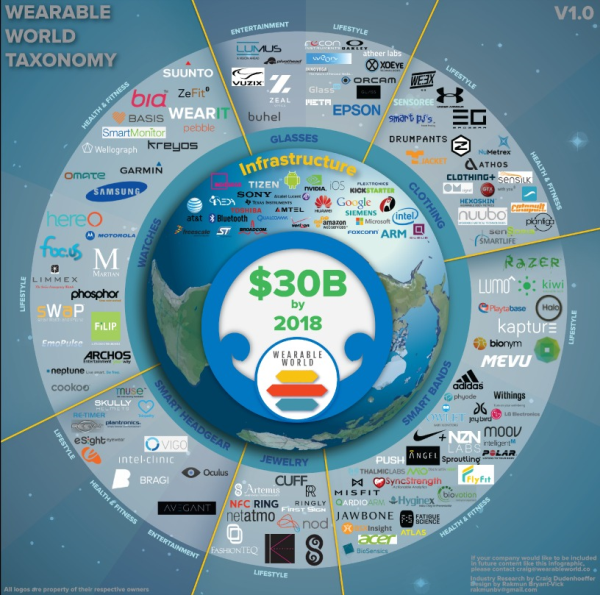 Carrie Yury: So the wearable economy is starting to “dawn.” It’s not quite there yet, but it’s on its way. Is that where we are?

Redg Snodgrass: Yes. When you look back at the development of the mobile economy, every year people would say, “This is the year of mobile! Mobile is finally here.” Everyone said that every year. I think we’re entering the first or maybe even second year of that with wearables, where everyone’s starting to say, “This is now the year of wearables!” But really, it’s not. The economy is not mature. We still don’t know how we’re going to make money, how we’re going to monetize it. There aren’t a significant number of people wearing anything other than one-off devices that don’t have ecosystems with monetization built around them.

For example, look at social. When Social became tangible was when people figured out how to monetize it. Facebook, MySpace, Twitter, Friendster – all those things were around for a significant amount of time, but we didn’t see people extracting monetization from those platforms until there were ecosystems built around them. I think wearables are going to go through that too over the next few years. Right now what I want to do is say, okay, these are the principles that made those ecosystems function and create revenue. Let’s learn from those past ecosystems and figure out what tangible take-aways are that we as a community can use. And that’s really the big focus – that’s what we’re going to go after.

You see it embodied in companies like Noor Siddiqui’s Remedy. Siddiqui is a girl that gets it. She’s a 19-year-old Thiel Fellow, she’s creating an application for Google Glass where doctors can see through another person’s Glass. That’s a great way to monetize. She’s already got engagements at Harvard and UPenn. Immediately, there’s a business model that works.

Kyle Ellicott: And for someone like that, she’s working on a product or platform like Glass that’s not yet been released to market, where some features are removed, some are added before the product comes to market. With Google recently removing video from their developer kit, she still has a platform that can do video. So now she’s one of the only people out there who has video-to-video conference calls through Glass. Which is a huge opportunity.

Another thing that’s happened between the two Glazed conferences is acquisition. Before we’d seen a few big companies or players in the space, but there was no real acquisition or huge products to hit market, aside from Google Glass and the Basis watch. But since then we’ve had numerous large products that have come out. Some have succeeded, some have failed, but we’re also starting to see acquisitions, which give more validation to this market and to what is being built. Like Redg said, we’re not there yet, but we’re beginning to see the signs.

Carrie Yury: So can you give an example of what it will take for the wearable economy to really become well established?

Redg Snodgrass: What made the iphone system work was a large user base of highly engaged people working on a platform with exact capabilities. So you knew what capabilities of the phone you could leverage, build out, and create your application. And you were able to tweak and find out which of the phone’s capabilities worked best for you. With Urban spoon it was the ability to use the accelerometer to shake it and the ability to use location so you knew what was near by. You could trust that every iPhone user had the exact same experience. So as these multiple platforms in the wearable space pop up, unless there’s uniformity, you’re going to have a problem.

So in my mind what you want to be able to do is provide a uniform sense of capabilities to a highly engaged mass audience. People need to have the belief that the monetization is going to be there with the sense of security that the capabilities are going to be uniform across different user experiences.

Carrie Yury: You talk about people need the confidence that the technology is going to be there and be supported, which is a great point. Do you see a conference like Glazed giving consumers more confidence in the wearable economy?

Redg Snodgrass: Yes, absolutely. One of the ways we do that is that we challenge the community about the hard issues surrounding wearables so they’re not just glossed over by great marketing. Sometimes I think I’m one of the biggest critics of our movement, but I do that on purpose. I think that through asking and working through the hard questions together we find that path way forward. The entrepreneurs who are building these companies are working together to bring us to outcomes that work.

Carrie Yury: One of the things I loved about the Glazed conference last year was it was such a tigh-knit, intimate community. What will it be like this year?

Redg Snodgrass: The conference is going to be bigger this year by 2x in terms of speakers and attendees. But we’ve worked really hard to generate the same kind of intimacy. And we’ll also be doing a follow up summit later in the year that brings everyone back to that intimacy level, too.

Kyle Ellicott: The exciting thing is that we’re seeing much larger, global reach, as well. We had representation from a few different parts of the world last year. But this year, we’ve not only attended global wearable events, but we have our own events and conferences around the world, too. Our brand is much more global than it once was. So Glazed is going to be a much more global conference, as well.

Carrie Yury:  What are one or two wearables that you guys are excited about lately?

Kyle Ellicott:  I’m a little biased, because I like all of the companies we work with, but outside of those, there are a few I’d mention. For example, I love the design of Drumpants. I’m curious to see what is going to happen with the Moto 360 watch. And of course I’m excited to see the Avegant Glyph.

Redg Snodgrass: I could list them off for days. There’s the Emotiv Insight, Scully Helmets, Estimote. The list goes on and on.