The Quantified Self: How Technology is Transforming Health

Recent advancements in technology and the increasingly vast array of digital devices available has led to a huge transformation in both the fitness industry and healthcare. The availability of devices that can track everything from heart rate to fertility-levels means that consumers are now able to proactively monitor and improve their own health through these innovative technologies.

The evolution of smartphones, cloud databases, and advanced sensors, has put an exponentially increasing amount of data at our fingertips. Consumers now have more access than ever to individualized tracking and personal data points. This new era of “big data” has meant that the concept of the quantified self, self-knowledge through self-tracking, has flourished. Apps can use algorithms to translate large amounts of data into advice and suggestions, possibly replacing the interaction between a doctor and patient. As the quantified self continues to gain momentum, consumers continue to take more control over the type and cost of treatment they receive.

Four technologies with the potential to transform our health are:

Humanscale’s Office IQ uses sensors on workstations to give users insightful details on the risk of sitting for long periods of time. Humanscale, the leading designer of ergonomic work products, teamed up with Tome Software, an expert in sensor technology, to design a product they believe will influence daily workplace habits. Bluetooth Low Energy (BLE) sensors in the desk and chair share data with a smartphone app, which then gives users recommendations on how often to stand and sit.

In July 2014 the Journal of National Cancer Institute found:

“When the highest levels of sedentary behavior were compared to the lowest, the researchers found a statistically significantly higher risk for three types of cancer ‒ colon, endometrial, and lung. Moreover, the risk increased with each 2-hour increase in sitting time, 8% for colon cancer, 10% for endometrial cancer, and 6% for lung cancer, although the last was borderline statistically significant. The effect also seemed to be independent of physical activity, suggesting that large amounts of time spent sitting can still be detrimental to those who are otherwise physically active.” 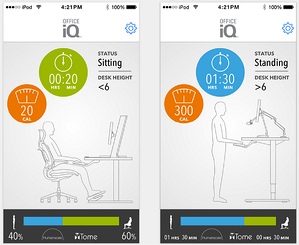 TempTraq: A digital thermometer for parents and children

Traditionally, thermometers were limited to in-person use. The school nurse takes a child’s temperature only after the child doesn’t feel well enough to attend class. And a parent’s childcare cannot extend past the home, as the child must be physically with the parent in order to administer the thermometer. TempTraq aims to change that with their wireless, wearable thermometer. It’s a peel-and-stick Bluetooth thermometer for busy parents who want to monitor their kids, especially when they’re sick. Using a mobile app, parents can monitor their child’s temperature by creating custom notifications that alert them when temperatures fall above or below a certain degree.

Self-awareness is key to health improvement. While consumers previously relied on personal trainers and nutritionists to give them full body assessments, in-home technologies like QardioBase eliminate the need for middlemen. QardioBase is a new kind of scale that measures body weight, body fat, bone and water composition, muscle density, as well as total body mass index (BMI). There’s even a mode that allows pregnant women to easily track their progress. Measuring less than one inch in height, QardioBase wirelessly syncs with a mobile app on both iOS and Android. 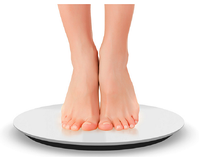 *QardioBase will be available in Spring 2015.

We exercise our body, so why not exercise our mind too? Muse is a brain-sensing headband to train your brain. In the same way that we use repetitive physical exercises to strengthen our bodies, Muse applies this same concept to enhancing cognitive skills with focused attention training. It uses electroencephalography (EEG) to measure the electric activity produced by the brain’s neurons. Coupled with an application called Calm, users are guided through mental exercises that provide real-time feedback as they train.

The quantified self is transforming not just personal fitness and health, but also the fitness industry and healthcare. As more people become engaged, empowered and informed, the more likely they are to take control of their own health and ultimately, to influence the type and cost of the healthcare treatment they receive.